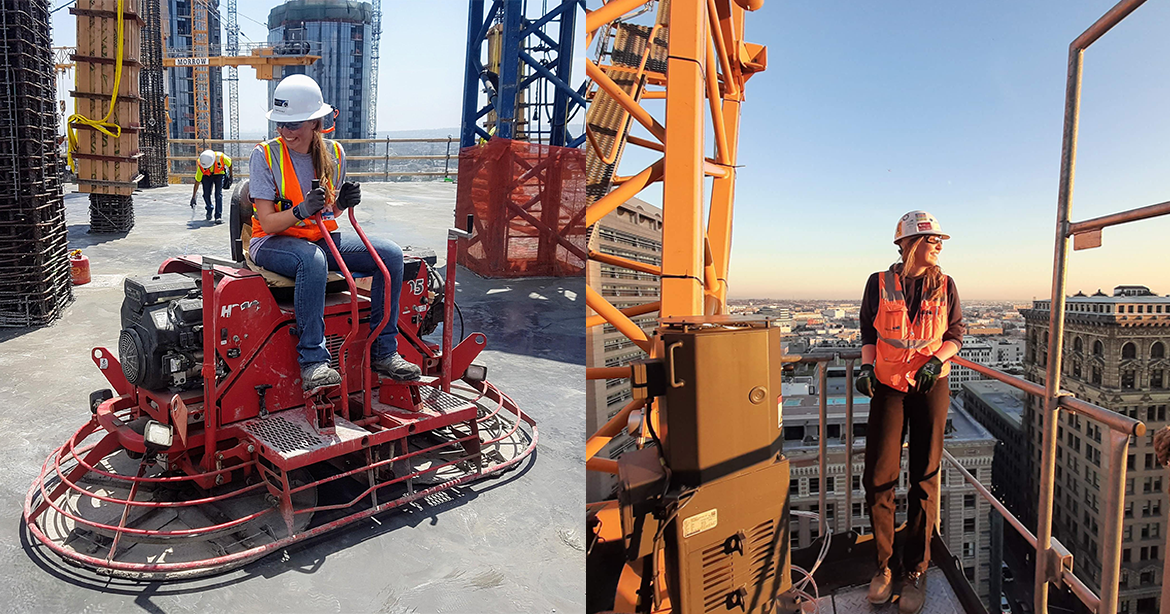 Kim started her career with Mortenson in 2018 after graduating from Montana State University. She moved to Seattle for her first project – the Bill and Melinda Gates Center for Computer Science and Engineering. Kim then traveled to Minnesota for scheduling training before moving to Los Angeles to work on the citizenM Hotel project. After two years, she was excited to move back to Seattle to work on the finishes at Climate Pledge Arena. While not an avid hockey fan, she loves going to Kraken games and finds it very rewarding to see everyone enjoying a space she and her team poured so much time and energy into perfecting. She is currently working on preconstruction for the Four106 office tower in Bellevue, with construction beginning in early 2022.

Why construction? How did you get into the position you're currently in?

Kim: I grew up in a smaller town where a lot of people either became teachers, firefighters, or nurses. When I was getting ready to go to college and thinking about what I wanted to do, I knew I wasn’t interested in those jobs, but I really enjoyed math. Math was something that I just absolutely loved, and my dad was actually a mechanical engineer for over 22 years. I didn’t really know what engineering was, but I thought “let’s go for it.” My freshman year at Montana State I started taking mechanical engineering classes and quickly realized that wasn't really my thing. A friend opened my eyes to studying civil engineering and it sounded like something that better fit me because I like to see the things that I'm working on. I realized I wanted to build and for a long time I thought I was going to do structural design. After my junior year, I had an internship in downtown Los Angeles building a concrete high-rise tower. And that's when I fell in love with it. I just loved being out in the field and getting to climb a tower every morning and pour concrete. Coming from a town of 5,000 people, it was the coolest experience to be in downtown Los Angeles and leave a lasting mark on the city. Getting to see that and being a part of the team that builds it and puts it together was incredible. After that I said, “okay, I'll do construction.”

What do you find fulfilling about your job or this industry?

Kim: The most fulfilling part is getting to be a part of something that you know is going to be there for years to come. And all these projects we get to go back to visit, and I'm probably going to be that person that's bringing my kids saying, “I built that” or “I was part of that.” In the grand scheme, I think for me, it's getting to go back and see something that you put all this work into and building for the community that you're in. On the everyday side, the things that are fulfilling are working with such high-performing teams and the relationships that you build internally within your company, but also externally with all of our trade partners. It's just really cool to be a part of that team and get to be working with so many different kinds of people and across all different trades forming relationships. Every building I've gotten to work on so far has been very different, so that presents all new challenges and it's just inspiring to see all the different ways you can build something.

What would people find surprising about your job or career path?

What's the most valuable lesson you've learned in your career?

What advice would you give to women in the industry or those interested in joining?

Kim: I would say be bold and be true to yourself. This industry is very male-dominated so I know it can be very intimidating to a lot of women, even when you're in this field. We don't have a lot of people that look like us to look up to because we don't have a lot of female leaders. I'm learning from one of my mentors right now that we're going to be different, we're going to do things a little bit differently, and that's okay. One thing she was just telling me is that we've got a lot of male leaders to look up to and there's not a lot of females, so we're trying to fit ourselves into this mold of how we think we should be by following these male leaders. So, we have to reinvent that mindset a little bit so that we can pave a better path for the future. I would also say to anybody that's interested in joining this field is that yes, it's male-dominated right now, but the way we change that is by building ourselves up and making a new wave for the future.

Read the other spotlights >>>