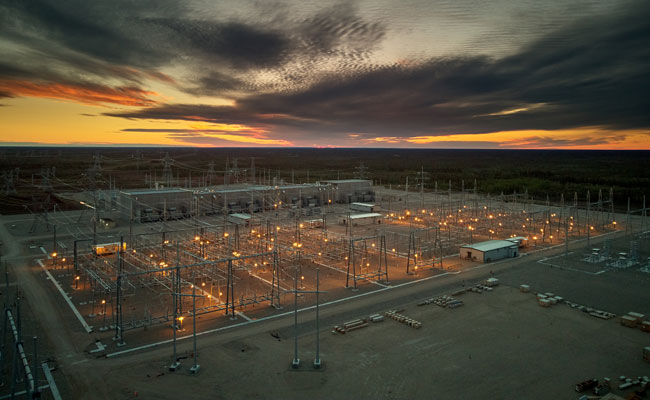 The Bipole III converter stations include the Keewatinohk Converter Station in northern Manitoba near Hudson Bay, and the Riel Converter Station near Winnipeg in the southern region of the province. The converter stations have a transmission capacity of 2,000 megawatts (MW) – enough to meet over 40 percent of the province’s peak electricity demand. HVDC transmission is the ideal technology to implement when electricity must be transported over vast distances from remote areas where it is produced to urban and industrial centers where it is needed, as HVDC transmission suffers much lower electricity losses than standard AC transmission.

“Siemens is a global leader in HVDC technology as Mortenson is in construction. With this combination of expertise and a joint effort within our organizations and Manitoba Hydro, we were able to complete this critical and challenging project on time and on budget,” said Faisal Kazi, President and CEO, Siemens Canada.

“We tailored the system to the specific requirements of Manitoba Hydro – including designing the solution and equipment for Canadian winter temperatures as low as -50 degrees Celsius,” adds Hauke Juergensen, Head of Large Transmission Solutions at Siemens Energy Management.

The Siemens and Mortenson consortium was responsible for the turnkey supply of the HVDC converter equipment and associated facilities, with Siemens delivering the system design and the manufacturing, supply and commissioning of the core HVDC technology while Mortenson provided design support and construction services for the supporting infrastructure, including converter station building, AC filters, and DC switchyards. The remote location of the Keewatinohk Converter Station, and the extreme winter weather conditions present at both sites provided interesting logistics and construction challenges for the team.

"The successful delivery of Bipole III required synergy between our customer Manitoba Hydro and the consortium of Siemens and Mortenson, a mutual respect for each other’s expertise and a laser focus on the project goals and deliverables," said Mark Donahue, Vice President and General Manager at Mortenson. "The project management and construction experience we amassed through our years as a General Contractor and an EPC partner were fundamental to the project’s success.”