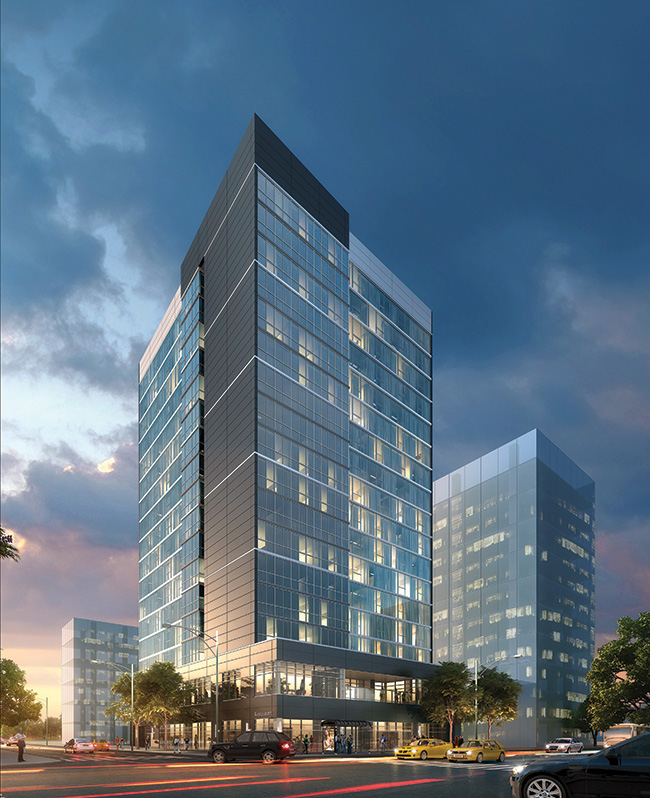 In its first real estate development project in Chicago, Mortenson has teamed up with lead developer Akara Partners to design and build a $67 million extended stay hotel in River North. The hotel is being designed by Norr Architects under a design-build arrangement with Mortenson for the the 17-story, 206-room Home2 Suites by Hilton hotel.

Mortenson and Akara Partners broke ground on October 6 for the hotel, located at 110 W. Huron. The site, at the corner of Clark and Huron streets, is currently a parking lot owned by Akara. The 120,000 square-foot building is scheduled to open in the first quarter of 2019 and will include 5,000 square feet of ground floor retail space.

“We see a tremendous opportunity for an extended stay hotel in River North, which is historically undersupplied for this product type compared to other major markets,” said Rajen Shastri, the founder/CEO of Akara Partners. “We sought out Mortenson as a partner for development and construction of this River North hotel because they bring an outstanding track record in the hotel development and construction industry.”

Mortenson has developed more than $600 million of hotel projects across the United States in the past five years. It also has extensive hotel building experience with completing more than 100 new construction and renovation projects, including modernizing the Cambria Hotel on East Superior Street and the Hilton Chicago on South Michigan Avenue. Building Design+Construction recently ranked Mortenson as the 8th largest hotel construction firm in the U.S.

“Our partnership with Akara has given Mortenson the opportunity to showcase our development and design-build capabilities in the downtown Chicago marketplace,” said Greg Werner, senior vice president who leads Mortenson’s Chicago office. “This is one of several active hotel development and construction projects that Mortenson has underway nationally.”

There are just a handful of urban Home2 Suites hotels, with most of these extended stay hotels built in suburban locations. The Home2 Suites urban hotels are custom built to fit the location. The River North hotel, for example, will feature a modern glass enclosure system and a jump lobby configuration to maximize ground floor retail, both of which are upgrades for the hotel brand.

The above rendering of the River North Home2 Suites hotel is from Norr Architects.