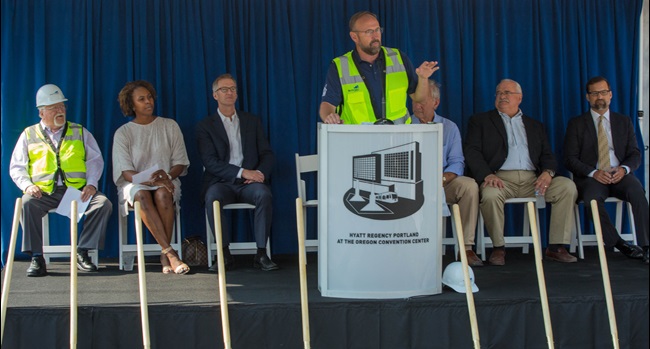 Waves of people working on the Oregon Convention Center hotel project threw shovel loads of dirt in the air at the groundbreaking ceremony on Friday.

The included members of the city, county, regional and governments that have studied and pushed for the project for nearly three decades, along with representatives of the businesses that are now going to build it.

"Who'da thought?" Metro President Tom Hughes asked, drawing laughs from the crowd at the construction site at Northeast MLK Jr. Blvd. and Holladay Street. "This is a very special day for the city of Portland and the Portland region in general.

Metro owns and operates the center, which the hotel is designed to support. It will be a 600-room Hyatt Regency with extra meeting rooms and additional banquet space intended to supplement future conventions at the center. The hotel will be built by Mortenson Development on property owned by partner Schlesinger Corporation.

"It's been a long time coming and real community effort to make it happen," said Tom Lander, vice president of Mortenson Development.

Read More at the Portland Tribune