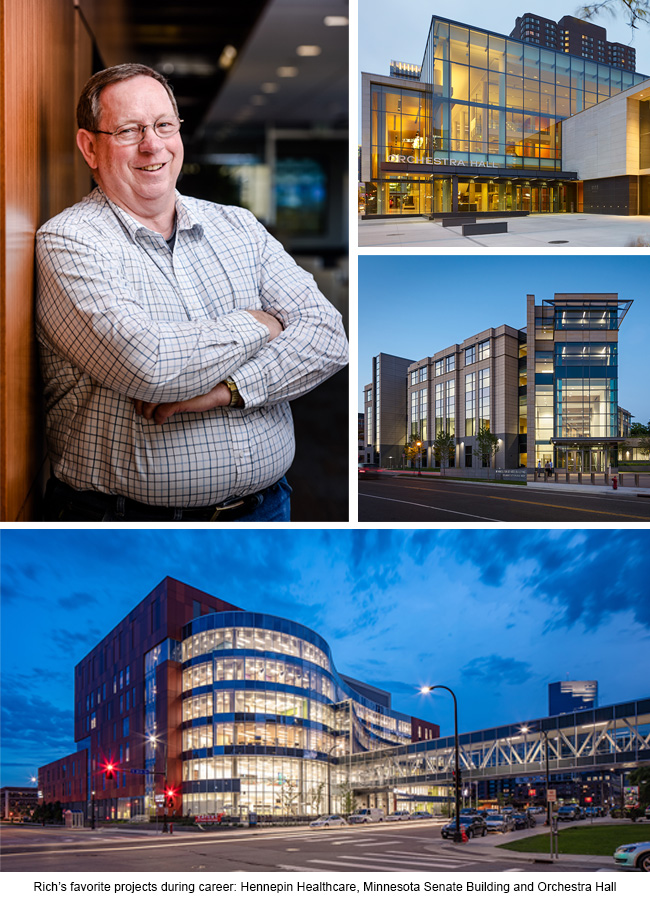 After 47 years of leading a long and impressive list of Mortenson projects, Rich Bistodeau — Senior Superintendent with the Minneapolis Office and the Company's longest-tenured team member — is hanging up his hammer this week.

"I will never tire of spending time with Rich in his jobsite office, wherever it may be," Kendall Griffith, General Manager of the Minneapolis Office, said. "Visual leadership, problem solving, care, and spirit are all so evident in our conversations. They are reminders that I love construction and that I am lucky to work with mentors and leaders like Rich."

Rich has consistently worked for Mortenson since starting as a carpenter on April 1, 1973. He was promoted to carpenter foreman in 1977 and then superintendent in 1981, where he was a leader on some of Mortenson's largest projects. His portfolio includes over a dozen projects for Abbott Hospital and more than six projects for Fairview Hospital, as well as Regions Hospital, 212 Medical Center, Lakeview Hospital, and Hennepin Healthcare – Clinic and Specialty Center.

"The respect everyone who worked with him — from sub-contractors and architects to doctors and nurses — was amazing," Scott Wordelman, retired Fairview Health Services and Hennepin Healthcare Executive, said. "He was a stable rudder during the turbulent times of a project and brought stability and confidence and ultimately exceeded expectations each time."

"Rich's impact on the world through his work may be viewed in the many projects he led," he added, "but for me he'll be remembered as a partner, leader, mentor, and friend. I was privileged to work with one of the best!"

"Rich's dedication, steady leadership, calm demeanor, and careful planning made him a highly respected superintendent," Gil Fleischhacker, retired Construction Executive, said. "I recall many sighs of relief when subcontractors and owners were informed Rich was going to be our superintendent on a new project. They knew exactly what they could expect — that their project would run safely, smoothly, and without antagonism."

In retirement, Rich is looking forward to spending time with his wife, Nancy, their three children, and five — soon to be six! — grandchildren, as well as wood carving and playing music. He will greatly miss the camaraderie of the project teams and teaching the "kids" on site. Rich is so grateful to have spent his entire career at Mortenson and working with a team of world class people.