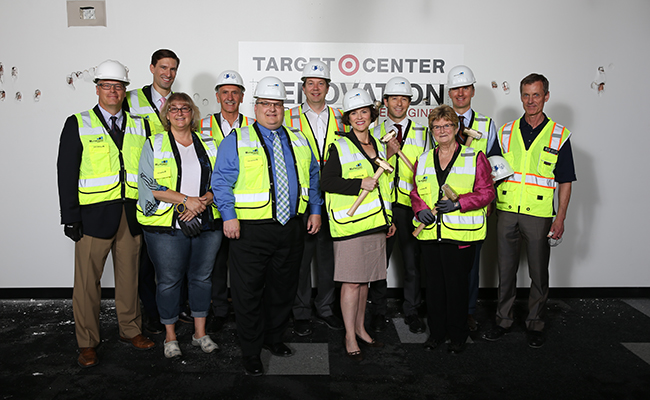 While demolition work has already begun onsite, the ceremony commemorated the kickoff of the renovation with the project team and City officials swinging the first golden sledgehammers, breaking down a wall in what will become the West Club on the skyway level. Minneapolis Mayor Betsy Hodges noted that after 20 years of investments, this renovation is set to take the facility to the next level. “These renovations will preserve and enhance the Target Center as an entertainment venue for decades,” she remarked.

The exciting $99M renovation, designed by Alliiance and Sink Combs Dethlefs, will improve the fan experience and revitalize the landmark entertainment facility in downtown Minneapolis. Click here to learn more details about the renovation project.

Mortenson, in association with Thor Construction, is the construction management team for the Target Center renovation project. Mortenson was the lead contractor when Target Center was completed in 1990. The Target Center is the 22nd busiest building in the nation, and 51st busiest in the world. It hosts about 200 events annually, and has 1 million visitors pass through its gates per year.