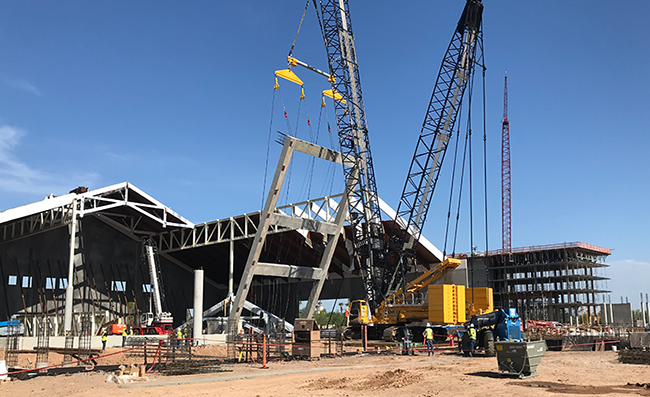 Recently, on Great Wolf Lodge Arizona’s project site, the first slide tower frame panels were lifted, weighing in at a more than 365,000 pounds and measuring more than 78 feet high and nearly 63 feet wide. The tilt-up panel frame will serve as the backbone to the water slide tower, as part of the first indoor waterpark in the state.

While extreme size is certainly something to acknowledge, that isn’t the only impressive fact about this tilt-up panel, or tilt-up panel concrete construction in the industry today. 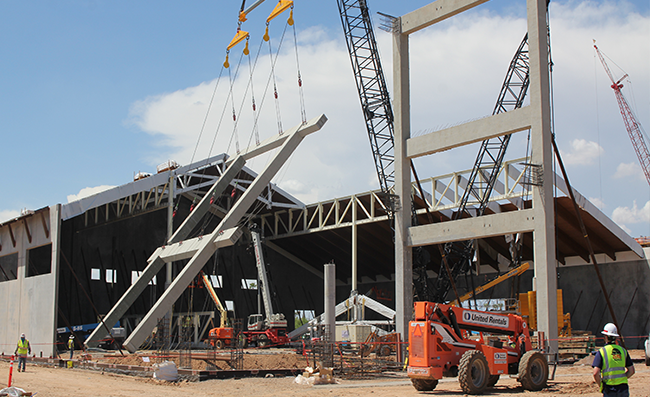 Tilt-up construction is a process by where a concrete panel is formed, reinforced, and cast horizontally on the ground. Once cured, the panels are lifted with a crane and set on a foundation, creating the shell of a building or structure, piece by piece. Tilt-up construction is a proven method for large, non-residential facilities such as office buildings, retail centers and warehouses, and remains a strong choice for safer delivery, large structures, flexible designs and aggressive schedules.

“The use of tilt-up construction yields a number of benefits to the project and owner, including time and cost savings, increased quality, and most importantly the reduced risk of injury,” said Brad Hughes, Mortenson’s project manager on the Great Wolf Lodge Arizona project. 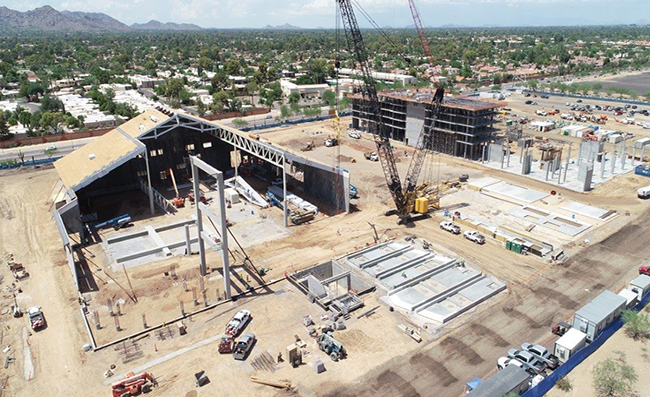 By switching the construction method to tilt-up in lieu of cast-in place, as it had been done on previous Great Wolf Lodge projects, the team was able to sequence the schedule in a manner that allowed work in multiple areas on site by multiple crews, which maximized efficiency and site usage. “Tilting these frames has eliminated hundreds of manhours working at heights and allowed us to move the work to the ground where it’s much safer, efficient and easier to control quality,” adds Hughes. “We are always looking for a better way to do something, so when we started talking about this method, we knew we had to do it.”

Mortenson’s concrete trade partner and designer, Suntec Concrete and Gensler respectively, have played an integral role in the coordination of the tilt-up panel construction at Great Wolf Lodge Arizona. Suntec, as one of the most prominent concrete contractors in the Mountain and Southwest regions of the United States, is no stranger to tilt-up concrete construction. The firm’s portfolio includes more than 150 projects that incorporate tilt-up panels, including 65,000 square feet of custom designed tilt panels at the recently delivered Odysea Aquarium at Salt River, as well as tilt-panel basement walls, and a 60-foot tilt panel tower for iFLY, an indoor skydiving facility also in Salt River-Maricopa Indian Community. Suntec was able to place these panels using a 300-ton tilt plane crawler crane. 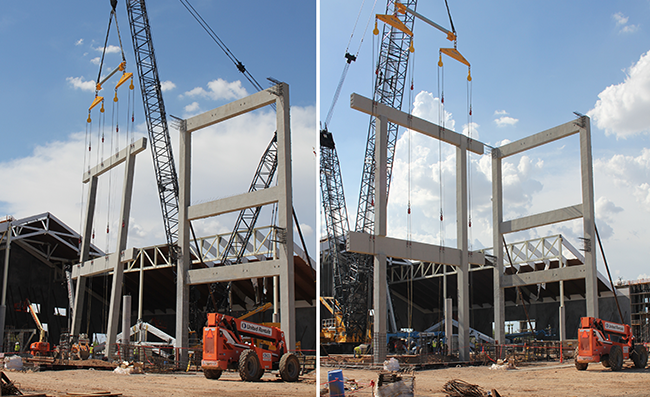 Together, Mortenson and Suntec have built a long partnership through collaborating on numerous projects. Significant projects together include the ongoing renovation to Maryvale Baseball Park, spring training home to the Milwaukee Brewers; the recently opened Hampton Inn & Suites Phoenix Downtown, and the Northern Arizona Health & Learning Center in Flagstaff, Arizona.

Because of the team’s immense planning efforts with Suntec Concrete and the erection engineer, the opportunity to utilize this innovative construction method has allowed Mortenson and their trade partners to efficiently and safely lift and construct the water slide tower and other aspects of the new hotel.

“This is the largest panel Suntec Concrete has ever lifted,” said Derek Wright, president of Suntec Concrete. “It’s exciting to be a part of a project where the team is innovative and ready to make decisions that benefit the owner. At Suntec Concrete, and Mortenson alike, we share that approach.”

What’s next for Great Wolf Lodge Arizona? The resort is set to open in the summer of 2019 and will be a year-round family destination.