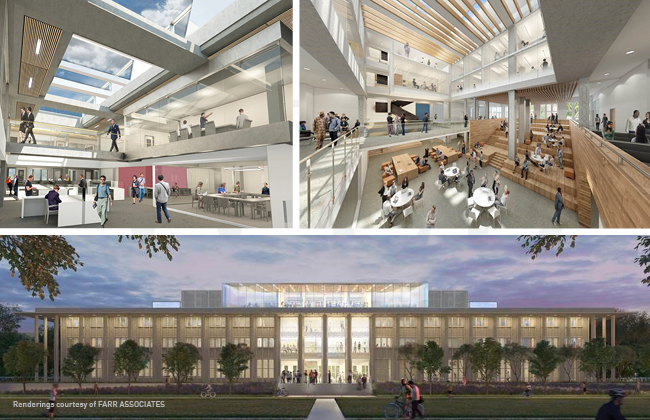 Mortenson Construction has been chosen to transform a 1962 landmark building by esteemed architect Edward Durrell Stone into the new home for the University of Chicago’s Harris School of Public Policy. Working from designs by Chicago Architect of Record Farr Associates and interior consultant Woodhouse Tinucci, Mortenson began construction in April on the renovation and expansion of the renamed Keller Center, which is scheduled to welcome students in January, 2019.

“The University of Chicago is creating a true architectural showpiece focused on academic excellence and environmental sustainability,” says Vladimir Stevanovic, the construction executive at Mortenson who is leading the project. “The Keller Center sets a new standard in adaptive reuse that emphasizes innovation, excellence, community and sustainability.”

While retaining and preserving the key features of its original construction, the Keller Center renovation incorporates new ideas and technology in sustainable development. The University and Mortenson set ambitious goals of attaining both LEED Platinum and the Living Building Challenge (LBC) Material Petal Certification, which once achieved will make it the only building on campus and the only building in Chicago of this size to be LBC-certified.

The renovated Keller Center will offer an exceptional environment for collaboration, research and education. Having served many functions over its history, most recently as a residence hall, the approximately 120,000-square-foot building will be rebuilt with individual offices for faculty and administrators as well as classrooms, numerous glass-walled conference and meeting rooms, lounges and reception areas. The open floor plan places glass-doored offices on the perimeter with communal space on the interior to maximize natural light and views of Hyde Park and campus.

Mortenson will add roughly 8,300 square feet for an executive education suite on a partial fourth floor, which will include a board room and green roof with a terrace. In the basement, it will replace space now devoted to University IT services and equipment, storage and electrical and mechanical rooms with student team rooms, tiered lecture halls, a lounge, and renovated offices for South Campus building engineers. The first floor will include a reception desk, café, additional offices, and a Dean’s suite, as well as student study booths.

A centerpieces of the adaptive-reuse project is its central four-story atrium, called the Forum, where student teams will gather to work on projects, faculty will meet to discuss research, and prominent leaders will give talks on world events.

To help achieve the LEED and LBC requirements, Mortenson began the project by salvaging fixtures, materials, equipment and other features, focusing on reusing, recycling or repurposing. For the Keller Center itself, Mortenson will reuse the building’s original dorm room wood doors, and wood millwork as well as relocating exterior limestone to the interior of the building for a feature wall. The wood of local salvaged ash trees will be turned into millwork for the architectural features in the forum.

Other sustainable features include placing photovoltaic arrays on the fourth floor to farm solar energy to power a portion of the building’s annual electricity usage. In the basement, Mortenson will install a storage unit to store up to 20,000 gallons of rainwater to be utilized as non-potable water within the building restrooms.

Mortenson has led a number of new construction and renovation projects for the University of Chicago, including the just-completed residence hall designed by Jeanne Gang, the Booth School of Business at NBC Tower and Administration Building renovations.

“Mortenson has demonstrated its ability to successfully manage quality, safety and workforce diversity and exhibit a culture of collaboration that facilitates turning complex and innovative designs into beautiful, sustainable buildings on time and on budget,” said Larry Blouin, Capital Project Delivery Executive Director for the University of Chicago. “Mortenson’s use of Lean and green processes and materials, coupled with cutting-edge applications of technology from laser scanning and barcoding to virtual reality, make them a valuable partner.”

Mortenson’s is a national leader in the higher education market with over $3.5 billion in projects since 1963.