to main content
Newsroom
NewsInsightsPodcastsVideosMedia Contact
Insight
Women at Work
Their numbers are still small, but more women are thriving in the construction trades. 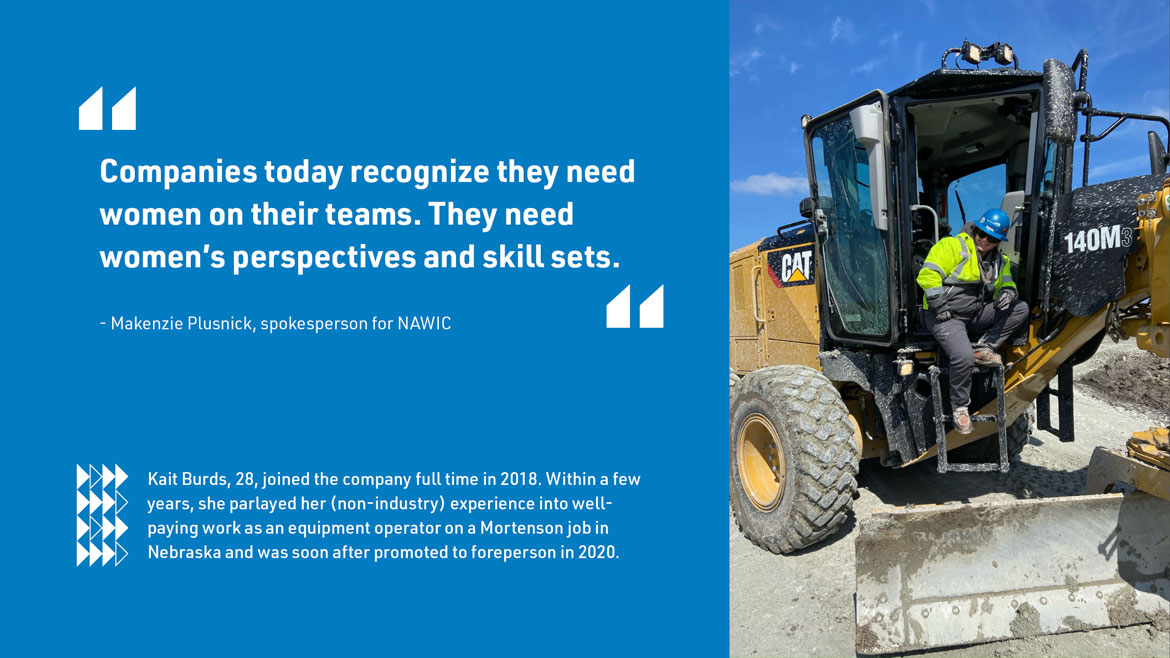 Construction? It wasn’t even a thought when Kait Burds was growing up. “Never in the Girl Scouts did they talk about it,” quipped the Dubuque, Iowa, native. “I never knew I could do this.”

Instead, the diehard snowboarder worked for a time as an instructor and snowmaker. “Then one day I got the opportunity to jump in the snowcat,” Burds said, referring to those trucks-on-tracks used for grooming ski runs. “It was honestly scary. It was the first time I got to run something that big.” 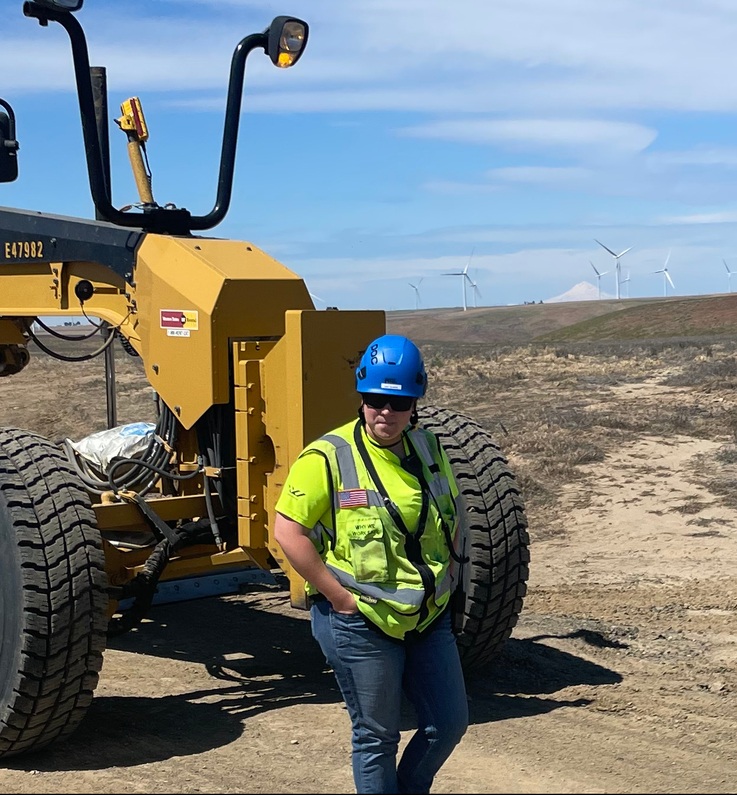 Kait Burds is a Mortenson civil foreperson now based in Arlington, Oregon. Mount Hood appears in the background.

Burds was quick to overcome her fears, falling for the thrill and the challenge of running heavy machinery. Within a few years, she parlayed that experience into well-paying work as an equipment operator on a Mortenson job in Nebraska. “I got to hop in a [bull]dozer and started working on a backhoe,” said Burds, 28, who joined the company full time in 2018 and was promoted to foreperson in 2020. “And I finished the job on a motor-grader.”

When young people think of construction careers, they likely picture beefy men with their hard hats and high-visibility gear. “Often, women don’t see construction as a possibility because of that stereotype,” said Makenzie Plusnick, spokesperson for the National Association of Women in Construction.

To be clear, men still fill the vast majority of construction roles. But increasingly, the industry promises big opportunity for women like Burds — that is, women who thrive in male-dominated settings. “Companies today recognize they need women on their teams,” Plusnick said. “They need women’s perspectives and skill sets.” The NAWIC chalks it up to construction’s historic labor shortage, plus the growing body of research linking diverse teams with better business outcomes.

Oh, and the work itself can be magical. 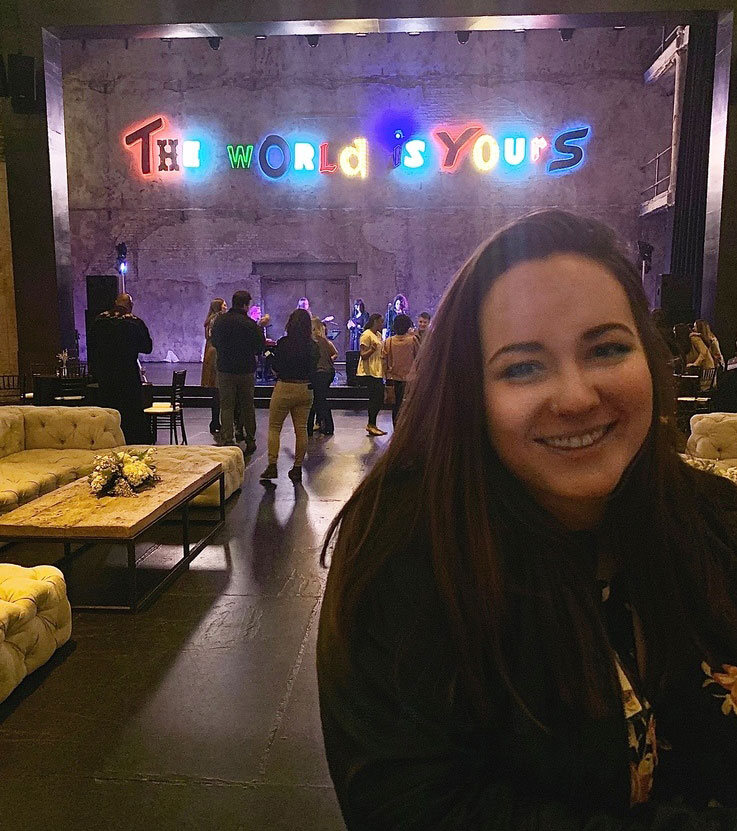 Kait Burds at a Mortenson women’s event in 2020.

“When you hop into a piece of equipment,” Burds said, with a little awe in her voice, “it doesn’t matter whether you’re a man or woman, whether you’re weak or strong.”

“It’s all mental,” she added. “That piece of equipment is the equalizer.”

Maria Valdez, a traveling laborer with Mortenson’s solar division, remembers her first day on the job more than two years ago. “They wanted to put me as a trash girl,” said Valdez, who hails from Del Rio, Texas. “I was like, that is not what I want to do. I want to throw panels.”

Valdez wanted to install those awesome skyward-facing cells that convert sunlight into electricity. “A lot of the guys thought I would hold them back from production,” explained the 32-year-old mother of two. But she stood up for herself, arguing her case before a foreman. “I’m very strong,” she remembered telling him. “Do not underestimate me.”

At 30 years old, Mortenson Superintendent II Mary Miller remembers a time when female trade workers were largely relegated to traditional roles. Before joining Mortenson, she worked for another large contractor.  “On my first job, I don’t remember there being a single craftswoman who wasn’t cleaning,” said Miller, who is based out of Mortenson’s Minneapolis headquarters.

As women rise in the industry, Miller has watched them command more ambitious craft roles. “I’ve seen the females go from being tagged only into cleanup positions, versus actually leading the work,” Miller shared. “On my last job, we had an electrical foreperson who was a woman. It was very powerful to see what she could do — and not taking crap from anybody.” 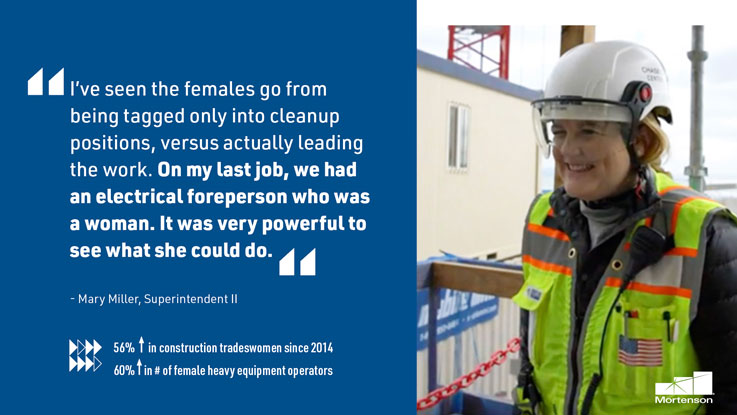 Federal employment data tell a story of slow but steady progress. Women filled about 9% of total construction jobs when Miller entered the industry in 2014, despite making up almost half of the American workforce. Most of those jobs were professional or office-based roles, according to the NAWIC. At the time, the U.S. Bureau of Labor Statistics put women at 2.5% of construction laborers (like Valdez) and 1.8% of equipment operators (like Burds).

By 2021, women held 11% of the country’s more than 11 million construction jobs. They accounted that year for 4.5% of construction laborers and 3% of heavy equipment operators. According to one estimate, women of color accounted for nearly half of these workers in recent years, with the strongest showing by Latinas.

At Mortenson, most projects exceed these federal averages. The current standard-bearer is the company’s Eagle Mountain Data Center project, in Utah, where women make up at least 30% of workers in hard hats. The craft workforce for Mortenson Solar, where Valdez works, was 11.5% women in 2021. Numbers like these make it easier for women to advocate for themselves and reach their full potential.

As for Valdez, she was quick to disprove the doubters on her first job site. Turns out, she has a knack for throwing panels. She also has a knack for leading by example. Mortenson made her a lead on her second project, building the Greasewood Solar farm in West Texas. There, Valdez’s humor and high energy proved effective at motivating others. “They would give me the slowest crew,” she said with a laugh, “because they knew I would pick up their numbers.”

Valdez ended up leading a crew that broke company records for most panels installed in a single day.

To be sure, the trades are no cakewalk for women, even today. Long hours and lots of travel can be a stretch for parents and other family caregivers. Layoffs are common. In fact, Valdez lost her job, at least temporarily, a few days after sharing her story, as Mortenson Solar contends with supply chain issues.

And, despite so much progress, women can still experience an inhospitable work environment. Once upon a time, television and movies told a story of rampant harassment on construction sites. According to several women who shared their stories, the obstacles today are usually more subtle. It’s not just sticking a woman with mundane tasks, with no opportunity to prove herself. A foreperson, for example, may see her authority questioned or outright ignored.

“As much as I’d like to say it’s nothing, there still is a level of sexism in the trades,” said Jessica Rabbach, a superintendent with Mortenson’s Milwaukee group.

So Mortenson is taking steps to make job sites friendlier to women. In June, Jessica Bailey, a veteran of Mortenson’s human resources department, switched to a full-time position focused exclusively on the craft workforce. On her agenda are issues such as paid family leave, trade school scholarships and supporting female craft workers in their leadership ambitions, Bailey explained.

“How can women lead in a way that allows them to be their authentic selves? How can they be the leader they want to be and still be respected through that process?”

Already, Mortenson has rolled out initiatives designed to bolster women’s leadership in the trades. For one, the solar division introduced the cleverly named Solar Sisters of the Traveling Hard Hat award last year to trumpet top talent on all job sites. Each awardee is unofficially crowned the “big sister for that project,” according to Eric W. Grenz, vice president and general manager of Mortenson Solar. “From there, she carries the torch on encouraging other women to raise their hands with questions or concerns. Or to convey that there are growth opportunities in solar.”

And at a Mortenson women’s conference in May, superintendents Miller and Rabbach teamed up to introduce a companywide network for women in the trades. “The goal is to form a business resource group for those who want to be field leaders — meaning superintendents or forepersons,” Rabbach said. “This gives us a safe space to learn and ask questions. It will be a resource for people to gain the education and skills they feel they’re lacking.”

As Rabbach sees it, this could go a long way to toppling one final obstacle: the sky-high expectations female craft workers tend to set for themselves. “We do a really good job of underselling ourselves,” Rabbach said of the industry’s women. “Oftentimes, we feel we need to know more to be equal.”

[Article] Mighty Are the Women