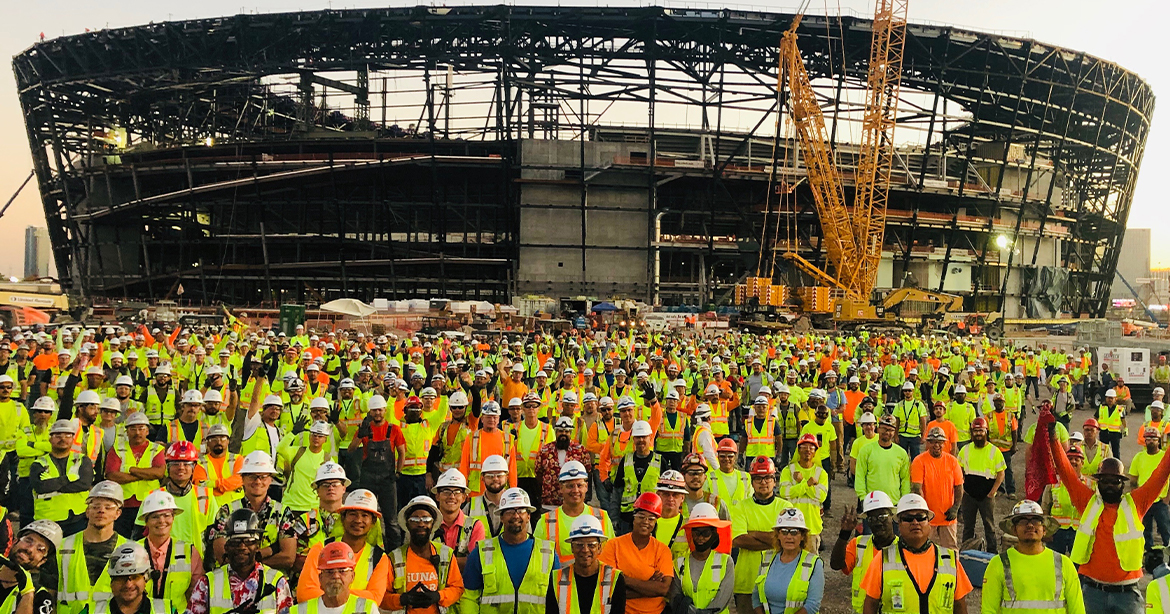 At Mortenson, we focus on strengthening the economic health of our communities. It’s not about checking boxes or achieving goals. It’s about making a difference, doing the right thing, and providing opportunities that impart lasting benefits to the communities where we live and work.

We consistently perform due diligence to understand each project's local marketplace and provide opportunities for small, women, and minority-owned businesses. We provide technical assistance through business classes, seminars, and facilitated mentoring relationships. We introduce partnerships that help trade partners improve business practices, grow their bottom line, elevate their business, and impact the local economy. This contributes to the overall economic wellbeing of our communities.

Construction projects demand a large craft workforce, which is an important part of Mortenson’s inclusion plan. To reflect the diverse nature of our communities, we are committed to providing targeted opportunities for residents who are underrepresented in the industry, including people of color, women, veterans, and people with disabilities. On the job, they gain skills and experiences that can be relied upon long after a project is complete.

Moving inclusion from an ideal to a reality can't happen without four things:

Mortenson’s Community Empowerment Program goes beyond the current project, fostering ongoing growth and success for local contractors. Our Sports + Entertainment group often comes into a community to build a very high-profile project; maybe even the biggest that community has ever seen. Our goal is to leave the community better than we found it through business growth, employment opportunities, and stewardship.

The role Mortenson plays in making diversity a reality was recently displayed during the construction of Allegiant Stadium in Las Vegas, Nevada. Even before we started design phase work, Lynn Littlejohn, vice president of Mortenson’s Community Affairs team, had been engaged. She was interacting with the local chambers of commerce, business leaders, contractors, and the Las Vegas Raiders to learn all she could about Las Vegas' marketplace: its strengths, weaknesses, resources, and values.

The Nevada legislature passed legislation that specified that 15% of the stadium's construction work performed was to be subcontracted to local small businesses. However, the definition of 'small business' did not align with any established definition nor typical certification anywhere else in the U.S. That meant there wasn’t a database to search for businesses that met the legislation’s criteria.

Tracking minority- and women-owned businesses, along with a diverse craft workforce was also an important metric for the project team. To that end, definitions of small, women-owned, and minority-owned business were solidified and a certification process to gain that status emerged. Mortenson’s Community Affairs team went to work building a database of hundreds of qualified businesses, and subsequently shared with all trade partners to facilitate procurement.

As we added to the database, Mortenson and our trade partners were able to bid out their scopes to a much larger pool of businesses. Littlejohn and the project team tracked progress and reported to ownership and the Stadium Authority monthly.  This level of transparency strengthened accountability and opened opportunity to perpetually expand outreach to the community.

The Measure of Success

Though the project goal was for 15% small business participation goal for Allegiant Stadium's construction, the hard work of our Community Affairs team, project management, and trade partners exceeded those results. Of all contracts awarded, 169 small businesses made up 23% of the contracts, totaling $293 million. Additionally, 42 woman- and minority-owned firms were awarded subcontracts totaling $86.4 million. The workforce that built the stadium was also reflective of the community, with 63% being women and people of color and 80% local Nevada residents.

While construction of the stadium has been completed, the model Mortenson developed for community engagement and inclusion will not soon be forgotten. “Stadium operations is implementing the processes that were highly successful on the stadium for gameday operations," Littlejohn smiles. "We have inspired what’s possible."

Mortenson showed the Stadium Authority and Las Vegas what good looks like. We showed them how powerful commitment, intentionality, transparency, and accountability can drive success for both the community and the project. Workplace diversity and business inclusion isn’t just a box to check. It’s an opportunity to make a meaningful and lasting impact on the community. The biggest winner in Allegiant Stadium's construction is the city of Las Vegas; the biggest payoff, intangible.

We focus on strengthening the economic health of our communities and providing opportunities that impart lasting benefits to the communities where we live and work. Contact us to learn more about our economic empowerment program.