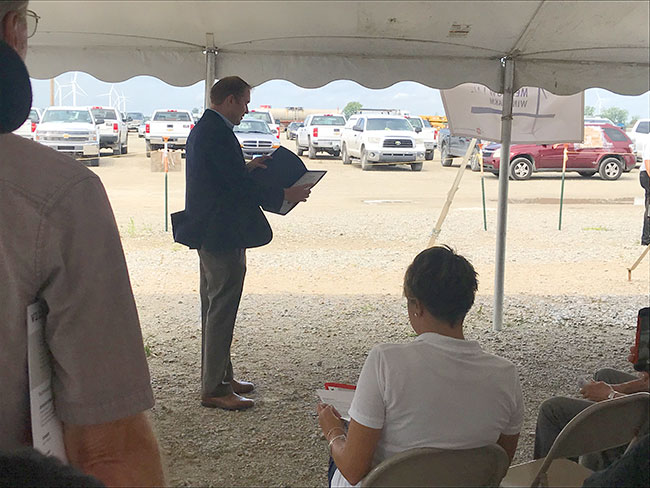 CHALMERS, Indiana, August 7, 2018 – EDP Renewables (EDPR), Cummins Inc., Mortenson, Vestas, and the American Wind Energy Association (AWEA) held a Crane Day for the public at the Meadow Lake Wind Farm on Tuesday, August 7, as part of a national celebration of U.S. leadership in wind power and the benefits it creates for all Americans.  Crane Day is one of the 30 events happening in more than 15 states from August 5-11 in recognition of the second annual American Wind Week.

Crane Day provided a unique opportunity for the public to see one of the largest cranes in the world erecting state-of-the-art wind turbines at Meadow Lake Wind Farm, Indiana’s largest wind farm.  Attendees arrived at the wind farm’s construction laydown yard where they could speak to representatives from the host companies as well as view displays about wind energy and collect giveaway items provided by each of the companies.  Guests then took a brief bus ride to a nearby area where they were able to observe active construction of the new wind farm.

EDP Renewables is the owner and will be the operator of the 200 megawatt (MW) Meadow Lake VI Wind Farm.  EDPR owns and operates the five operational phases of the Meadow Lake Wind Farm.  Cummins Inc. is an offtaker of the Meadow Lake VI Wind Farm, purchasing 75 MW of energy from the project.  Mortenson is the balance of plant contractor for the project, and Vestas is the turbine supplier.  AWEA is the national trade association that represents the interests of America’s wind industry and also hosts American Wind Week.

“This American Wind Week, we salute the more than 105,000 U.S. workers who make it possible to transform the power of wind into affordable electricity that our families and businesses rely on,” said Tom Kiernan, CEO of AWEA.  “We’re building more U.S. wind power today than ever before.  This is what leadership looks like – growing economic opportunity, homegrown energy, and cleaner air from sea to shining sea.”

Supporters of wind energy across the U.S. launched American Wind Week last year when wind power became the country’s largest source of renewable energy capacity.  Today, that leadership is growing with a record amount of wind power under construction at wind farms across America. The U.S. possesses world-class wind resources, with some parts of the heartland and coasts known as the “Saudi Arabia of wind,” and U.S. wind farms are the most productive among countries with the highest levels of installed wind power, like China and Germany.

The economic and environmental benefits of U.S. wind power are substantial.  Across the nation, a record 105,000 Americans work in wind power, affordably and reliably supplying more than six percent of U.S. electricity.  In fact, wind turbine technicians and solar installers are the nation’s two fastest growing jobs according to the Bureau of Labor Statistics. And, using wind energy created $8 billion in public health savings during 2017 alone, by avoiding air pollution that creates smog and triggers asthma attacks.

Visit AmericanWindWeek.org to learn more about wind power and to see a full map of the week’s events. If you can’t make it to a Wind Week event in your state, you can still participate by sharing why you’re proud of American leadership in wind power with #americanwindweek on social media.

For a library of up-to-date images of wind energy, please use this link.

EDP Renewables North America LLC (“EDPR NA”) and its subsidiaries develop, construct, own, and operate wind farms and solar parks throughout North America. Headquartered in Houston, Texas, with 45 wind farms, five solar parks, and 13 regional and development offices across North America, EDPR NA has developed more than 6,200 megawatts (MW) and operates more than 5,600 MW of renewable energy projects. EDPR NA is owned by EDP Renováveis, S.A. (EDPR). The first phase of Meadow Lake Wind Farm was built in White County, Indiana, in 2009. With the completion of Meadow Lake VI Wind Farm, the capacity of all six phases will exceed 800 MW, making it the largest wind energy project in the state with enough capacity to power more than 200,000 Indiana homes. For more information, visit www.edprnorthamerica.com.

Cummins Inc., a global power leader, is a corporation of complementary business units that design, manufacture, distribute and service a broad portfolio of power solutions. The company’s products range from diesel and natural gas engines to hybrid and electric platforms, as well as related technologies, including battery systems, fuel systems, controls, air handling, filtration, emission solutions and electrical power generation systems. Headquartered in Columbus, Indiana, (U.S.A.) since its founding in 1919, Cummins currently employs approximately 58,600 people committed to powering a more prosperous world. Cummins serves customers in about 190 countries and territories through a network of some 500 company-owned and independent distributor locations and approximately 7,500 dealer locations. Cummins earned about $1.0 billion on sales of $20.4 billion in 2017. Press releases can be found on the Web at www.cummins.com. Follow Cummins on Twitter at www.twitter.com/cummins and on YouTube at www.youtube.com/cumminsinc.

Mortenson is a U.S.-based, top-20 builder, developer and provider of energy and engineering services committed to helping organizations move their strategies forward. Mortenson’s expanding portfolio of integrated services ensures that its customers’ investments result in high-performing assets. The result is a turnkey partner, fully invested in the business success of its customers.

Vestas is the energy industry’s global partner on sustainable energy solutions. We design, manufacture, install, and service wind turbines across the globe, and with 92 GW of wind turbines in 79 countries, we have installed more wind power than anyone else. Through our industry-leading smart data capabilities and unparalleled 78 GW of wind turbines under service, we use data to interpret, forecast, and harness wind resources and deliver best-in-class wind power solutions.

AWEA is the national trade association of the U.S. wind energy industry. We represent 1,000 member companies and over 100,000 jobs in the U.S. economy, serving as a powerful voice for how wind works for America. Members include global leaders in wind power and energy development, turbine manufacturing, and component and service suppliers. They gather each year at the Western Hemisphere’s largest wind power trade show, the AWEA WINDPOWER Conference & Exhibition, next in Houston, May 20-23, 2019. Find information about wind energy on the AWEA website. Gain insight into industry issues on AWEA's blog, Into the Wind. And please join us on Facebook, and follow @AWEA onTwitter.